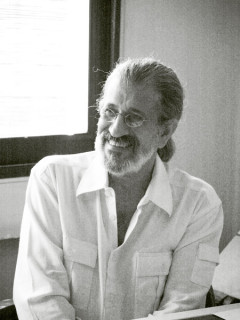 Hamid Nourkeyhani is an Iranian artist who was born in Tehran in 1947.

An architect by profession, he graduated from the Faculty of Fine Arts of University of Tehran, one of the most prestigious schools of architecture in Iran. In 1968, he began his career in the architecture firm of internationally renowned architect and artist, Mr. Kamran Diba, where he was encouraged to explore all his potentials and not to limit himself to his profession. This gave Hamid the confidence to follow his other passions and extend his artistic activities to include painting, sculpture and writing poems as well as composing music.

For the majority of his career over the past 40 years, architecture remained Hamid's main focus and won him major national and international titles and awards. It, however, left him few opportunities to explore his other artistic passions and skills.

It is only since 2010 that Hamid has been able to spend some time developing his painting skills. Still faithful to his architectural roots, he seeks inspiration from the designs he has made throughout the years, revisiting them, and transforming them into an abstract and colorful composition that takes the spectator to a world of euphoria and mystery.﻿﻿﻿ ﻿